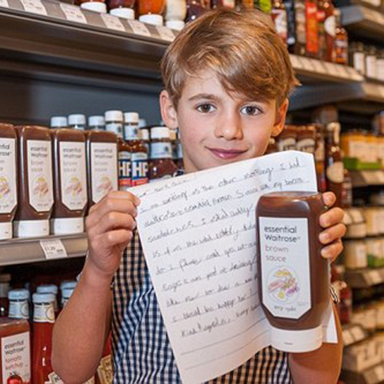 Über designers watch out, there’s a new kid on the block.

Waitrose has changed its own brand brown sauce packaging after seven-year-old shopper Harry Deverill decided their current design (which features a tomato and some unidentifiable brown objects) needed a bit of a revamp.  Cue Harry’s illustration of a slap up Full English across his own special edition run of sauces - not bad for someone still in primary school.

Harry’s homemade designs make a great PR story, buy they also make a valid case for the importance of retail packaging design within the marketing mix.

The recession has played a big part in changing consumer behavior; while supermarkets have had to fight especially hard to help make their own brand products appear more premium, personalised packaging has helped brands including CocaCola, Heinz Soup and Dairy Milk to develop a more emotional connection with shoppers. The consumer has never had a stronger influence, and brands need to ensure they’re working with advertising agencies and designers who really know their stuff in order to stand out. Ahem!