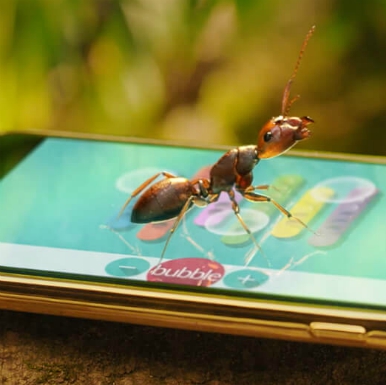 After months in the making and a big build up to one of the nation’s favourite TV shows, we’re especially excited to launch our idents for tombola’s sponsorship of I’m A Celebrity! From shooting at the end of summer, to last night’s first episode, a lot has gone into creating over 50 idents, so the whole office was keen to tune in!

Each ident was created to promote tombola bingo’s sister site– tombola arcade, following the brand’s push to further establish itself as the home of instant win gaming. With all creative concepts from the Über team, we took to playing on tombola’s fun brand image, with idents featuring jungle bugs playing tombola arcade games on phones. The bug characters also take on the role of viewers, often commenting on the show’s content and key activities in the I’m A Celeb calendar!

We were keen to minimise repetition, and with 50 different idents to produce, that’s no mean feat… But, we managed it with the help of our bug characters! Scarlett Moffatt, last year’s Queen of the Jungle also features as the sign-off voiceover, with ads running throughout I’m A Celebrity and Extra Camp schedules, as well as featuring on repeat shows and on the ITV Hub.

As part of the I’m A Celebrity promotion, we’ve also created a total of six TV commercials… Yep, we did say we’d been busy! Click here to check out just a few of the idents we’ve been working on.