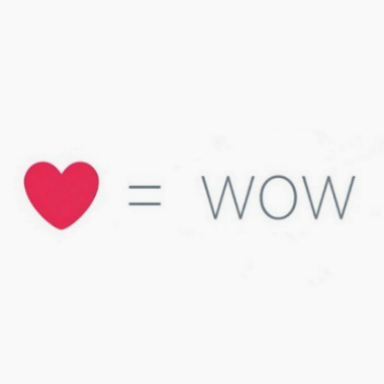 To the horror of many, Twitter switched things up this week by changing its star ‘favourite’ icon to a heart, now representing a ‘like’ on the platform. As Twitter looks to enter the mainstream, the decision to associate itself with the ‘like’ made recognizable by Facebook doesn’t come as a surprise.

Plenty of users were unimpressed, stating that a ‘like’ isn’t always the appropriate response. This is an issue Facebook has also encountered, leading to the imminent introduction of a new range of reactions. Could Twitter eventually find this is a matter they too have to address?

For us, we’ll be monitoring interactions on Twitter with extra interest, keen to see if this essentially small change will have an impact on engagement levels… Here’s to the heart!

In order to launch it’s entries campaign, the 20th Annual Webby Awards enlisted big Internet players to create another batch of posters with the theme ‘The Internet Can’t Be Stopped’. The likes of National Geographic, Facebook and Google were all involved, with Google’s take showing an the emoji inspired representation, featuring references to Tinder, the selfie stick and the Facebook ‘thumbs up’.

Check out the posters over on Adweek.

This week saw popular online influencer Essena O’Neill become a topic of talk in relation to influencer marketing. With over a half a million followers across her social platforms, the blogger decided to reveal the truth behind her ‘contrived’ content, exposing the reality of paid promotions and the efforts gone in to its creation. After dramatically altering her Instagram captions to truthful statements such as ‘paid $400 to post’, Essena went on to delete her account.

While the involvement of social influencers in plans can be beneficial, O’Neill has raised the importance of accounting for authenticity in strategies. A quick hitting result may sound appealing, but long lasting, meaningful relationships can lead to bigger rewards in the future.