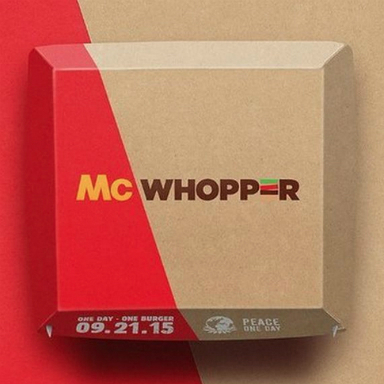 Facebook Launches ‘M’
Facebook has just announced the introduction of ‘M’ its new personal assistant for Messenger. Rivaling the likes of Siri and Cortana, M is on hand to help with everything from gift buying to organizing appointments. Facebook has gone down the personal route, employing staff to supervise answers, rather than providing a completely artificial response. Not only can M answer the questions, it can also complete tasks on your behalf. If M is able to organize those Monday morning coffees then we’re sold.

The McWhopper Proposal
This week Burger King offered an olive branch to its rival McDonalds after a proposal to mark International Peace Day with the creation of the ‘McWhopper’ burger.

Combining the best bits from the Whopper and the Big Mac, the burger would be a one off available on September 21. Pitched as a chance for the two companies to unite, the campaign aimed to raise awareness for International Peace Day, with proceeds going to charity.

Burger King didn’t run this by halves, with an ad in the New York Times, a dedicated McWhopper site and an open letter to McDonalds on how they’d planned out their strategy. Amped up with emphasis on the tongue in cheek rivalry, the stunt got plenty talking at the thought of the burger mash up becoming a reality.

Unfortunately for those gearing up for this Frankenstein’s Monster of burgers, McDonalds turned down the idea with a response on Facebook from CEO Steve Easterbrook. While the McWhopper may have been a cardiologist’s nightmare, it would have been interesting to see how these fast food giants would handle working together.

Instagram Updates from Über
With August coming to a close and another busy month almost rounded up, we’ve been getting snap happy over on Instagram. For all our office goings on and latest updates, have a flick through our feed @uberagency, or check us out on desktop at instagram.com/uberagency.